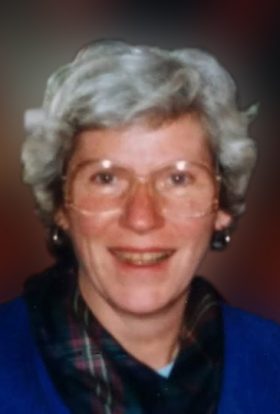 Evelyn “Evy” Carrol Tromp left us on the eve of the New Year 2019. Her life had several twists and turns. She was born in Kenosha, WI on August 19, 1935, to Evan Ost and Grace Muriel Smith. Big sister Polly Knoll and big brother Gary Ost were thrilled. Their dad was a salesman for Macwhite Wire Rope Company. Their …read more

Evelyn “Evy” Carrol Tromp left us on the eve of the New Year 2019. Her life had several twists and turns. She was born in Kenosha, WI on August 19, 1935, to Evan Ost and Grace Muriel Smith. Big sister Polly Knoll and big brother Gary Ost were thrilled. Their dad was a salesman for Macwhite Wire Rope Company. Their mom was a registered nurse who had to begin her career when Evan died; Evy was only 9 years old.

Evy enjoyed her youth frolicking in Whitefish Bay, Wauwatosa, Burnett, and Beaver Dam; climbing trees, making forts by digging holes in the dirt, even playing cards on the roof of the family garage. She grew into a fun-loving, caring, and devoted lady.

After high school she had a great time in nurse’s training at Madison General Hospital, where she met and married Sheldon Ambrose Chicks, a medical student. They soon started their family with the births of four children in quick succession; Cynthia Carol, Jeffery Alan, Julie Ann, and Kathryn Ann. Jeff’s birth caused complications where she almost died from a placental abruption. She would recall this event remembering a lot of people surrounding her trying to find a solution. Young Evy was taught by her mom how to sew. This became a lifelong love of hers. She was able to continue sewing with the help of her daughter Cindy until this past year. Hand-made clothes, mittens, underwear, and home decorations were under constant construction. While married to Sheldon she taught her children to love, learn, and accept. This union however ended under great stress. She like her mother, found herself re-entering the work force to provide for her children. She eventually became the Director of Nursing at Menomonee Falls Nursing Home where she flourished.

In 1979, she married for the second time, to her best friend Barb Keller’s brother Thomas James Tromp, who also had four children. This blending brought her into her retirement years. The two moved to Kewaskum, WI in 1989. More fun, less worry began to be enjoyed daily with hiking, biking, camping, square dancing, motorcycling, and volunteering. Of course it wasn’t just the two of them, many grandchildren were in on the shenanigans; Ellen, Andrea, Derek, Annie, Muriel, Theodore, Taylor, Benjamin, Jordan, Kayla, Jennifer, Rachell, Stephanie, Amanda, Samantha, and Desiree. She would often gather everyone to cook up a storm of potato pancakes in the basement or roasting home-grown corn in the backyard. None of us will forget the candlelight hikes at Zillmer Trail, followed by hot chocolate and soup.

Evy was preceded in death by her parents, her brother, her beloved husband Tom, many friends, and most unfortunately her son Jeff. Her surviving children and step children; Cynthia (Daniel) Beyer, Dr. Julie Chicks, Kathryn (Everett) Russell, Christine Kjell (nee Tromp), Michael Tromp, Annelouise (Wayne) Noordhof (nee Tromp), and Paul Tromp, wish peace to all who knew her and loved her. Our mother was an amazing, wonderful, and beautiful soul.

Evy was an accomplished gardener, spending many hours nurturing plants indoor and out. As much as she loved plants and flowers, she was also very practical, so please consider donating to www.alz.org in lieu of flowers or gifts.

A special thanks and gratitude to the Alzheimer’s Association, they provided much comfort and advice as our family took this long road.

Please consider donating to www.alz.org in lieu of flowers or gifts.

Help tell the story of Evy by contributing to the Life Event Timeline. Upload the photo of an event...

Sending thoughts and prayers to all of you. Evy and Tom will be square dancing together again.

Condolences and sympathies from Nick, Abbey, and Ethan

Ted and I are so sorry for your loss. It was a pleasure to have met your mother at the going away party for your son.