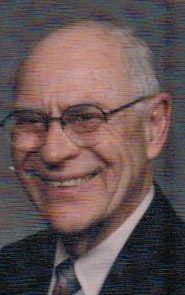 Bill was born and grew up in West Allis where he graduated from West Allis Central High School in 1942. He entered the Army in March, 1943 serving with the 178 Ordinance Depot Co., 1st Army in the European Theater during WWII, participated in the Normandy Invasion, Northern France, the Battle of the Bulge, Rhineland and Central Europe receiving five battle stars. William received a Bachelor of Science Degree in Chemical Engineering from the University of Wisconsin-Madison in 1949.  He married his high school sweetheart, Charlotte Lange, on September 7, 1946 and had a successful career with the Centralab Division of Globe Union, and later Philips Electronics, as a process and materials engineer.

One of Bill’s favorite pastimes was cooking, and he was famous with the family for making homemade Belgian waffles. He loved eating a fine meal, especially when accompanied with a dry martini. Bill and Charlotte acquired a cottage on Silver Springs Lake in Neshkoro, Wisconsin in 1978 where they enjoyed spending time for decades to come. After moving to Waukesha, he made a daily habit of walking through the beautiful park nearby their condominium. He loved camping, fishing and hiking. Bill was so easy to love and a friend to all!

The family wishes to thank his excellent team of doctors and staff through ProHealth Care.

Help tell the story of Bill by contributing to the Life Event Timeline. Upload the photo of an event...

Bill was on a chartered motor coach tour I took back in 2013. He was the kind of man that you felt that you always knew him when you first met him. I enjoyed his life stories and it was great that he enjoyed his retirement. Above all, he knew his Lord and Savior Jesus Christ. May the Lord Jesus Christ be with Giesfeldt family at this time and forevermore.