Ray’s father Michael Peckman’s line of work as a glazier allowed the family to travel across the USA, where Ray attended schools in several states, graduating from Pulaski High School, Milwaukee, WI in 1948.

As an adult, Ray worked along side his father allowing him to continue to travel the USA.  They worked on many government jobs, including several VA Hospitals.  He was to supervise a new job, but his time to be drafted was nearing, so he enlisted into the Army. He served state side as Private First Class during the Korean War, February 16, 1951 – February 15 1953.  Ray learned how to cook from his mother and grandmother, so when the Army found out about that, they gave him a job as head cook.  A story he has told many times is when the officers tasted the meals he made, they wanted him to cook for them, but he declined stating he wanted to cook for his own men.

Ray loved to dance!  It was not only a very enjoyable past time, but a way to compete and proved to be very profitable as that is how he met his wife Marilyn (nee Spilker).  They married on June 5, 1953 and had 6 children together.

Working for other glass companies over the first years, he decided to start his own business in 1965 and the R. T. Peckman Glass Company was born.  He did everything from installing new and replacing old doors and windows, mirrors, hand beveling (almost a lost art), restoring crystal and working with stained glass. He often did custom pieces for customers and his creativity and attention to detail was known around the states.  His old glass machines are currently at a university in northern Wisconsin where the art of hand beveling is being taught on them.

Fishing was his favorite outdoor recreation, taking him to numerous lakes, large and small, throughout Wisconsin and even to Canada.   He had many fond memories of fishing with his sons and his neighbor and friend Ollie.  He often proudly told stories of the Muskies he hooked and mounted.

Ray often “camped out” before estate sales, enjoyed the “hunt” for rare treasures and over the years had built many collections.

With all of the accomplishments in his life, when he was recently asked what he was most proud of, pausing very briefly he stated “my children … and grandchildren”.

A special thank you to the staff at the Clement J. Zablocki Veterans Hospital, Milwaukee, Wisconsin for their respectful care of our father until his passing and their final salute.

Help tell the story of Raymond by contributing to the Life Event Timeline. Upload the photo of an event... 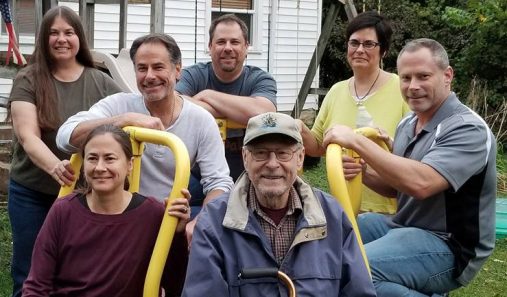 Be the first to share a memory of Raymond.