Veronica J. Ropele, age 91, a resident of New Berlin, WI, and formerly of Norway, MI passed away on July 20, 2020, at Season Hospice in Wauwatosa, WI.

She was born in Hermansville, MI on June 21, 1929.  Veronica was the 10th child of 12 children born to Joseph and Anna (Nazay) Rodman, immigrants from Croatia, which…read more

Veronica J. Ropele, age 91, a resident of New Berlin, WI, and formerly of Norway, MI passed away on July 20, 2020, at Season Hospice in Wauwatosa, WI.

She was born in Hermansville, MI on June 21, 1929.  Veronica was the 10th child of 12 children born to Joseph and Anna (Nazay) Rodman, immigrants from Croatia, which was known at the time as Yugoslavia.

Veronica grew up in Hermansville and graduated from Hermansville High School in June of 1947 as Valedictorian of her class.  After graduation, she attended Badger Business College in Green Bay.  Her first places of employment were in the Thiensville, WI area for the Herbert A. Nieman Fur Company, and the First National Bank of Thiensville.  She later returned to Norway where she married Marvin Ropele on August 8, 1953, at St. Mary’s Church in Hermansville, MI and resided in Norway where they raised their family.  He preceded her in death on September 8, 1969.

She became employed as a part-time secretary at Holy Spirit School in Norway.  In April, 1977 when the First National Bank of Hermansville opened a branch bank in Quinnesec, MI she was hired as a teller and was employed there until she retired on December 31, 1994, also having served as their Branch Manager.  After retirement, she served as their 55 Plus Club Coordinator.  She graduated from Northern Michigan University’s School of Banking.

In 1993, she received the Athena Award which was given to the top businesswomen in Dickinson County who played an important role in business and local communities.

After she retired, she spent her leisure time doing volunteer work.  She counted money for 13 years at St. Mary’s Church in Norway and was a member of their St. Vincent de Paul Society. She spent time at the local nursing home helping with their socials.  She was active at Holy Spirit School helping as a bookkeeper for their fundraisers.  She was a former member of the Norway-Vulcan Women’s Club and a long-time member of the Croatian Fraternal Union Holy Cross Lodge #259 in Hermansville.

She enjoyed spending time with her grandchildren, reading, crossword puzzles, talking on the phone connecting with her friends and family, and watching sports on TV, especially the Packers and Michigan State Spartans.

She was a devoted and loving mother to her children, Michael (Diana) of Howard City, MI and Winter Haven, FL, and Lori (Roger) Birenbaum of New Berlin, WI.  Proud grandmother of Nicholas and Noah Birenbaum of New Berlin, WI.   She is also survived by her sisters, Frances of Milwaukee, WI, and Barbara (Richard) of Edina, MN, and one brother, Frank of Hermansville and sister-in-law, Lois Erspamer of Marquette, MI.  She was the fond aunt to many nieces and nephews. 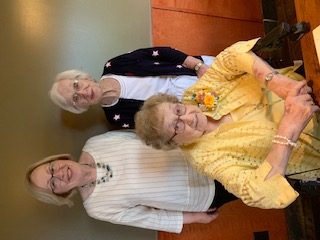 When someone we Love becomes a Memory, Their Memory becomes a Treasure; Always and Forever in our Hearts. What a pleasure it was to spend time with your mom visiting when I brought communion to her after mass. She reminded me so much of my mom; always a smile, happy thoughts, and so loving. After she moved I still enjoyed our telephone conversations and she always had to know the latest news in Norway! Prayers and Love to you all, Rosemary and Family

In the Love that surrounds you, May you find Strength; In the Memories you Cherish, May you find Peace... God's Love and Blessings to the Family of Veronica, From her Parish Family of St Mary's Norway, MI

I write this because I too have lost both my Parents, most recently my Mom and losing a Mom is truly not easy yet having mine for 59 years was a true blessing as I know Veronica was for you. Although I never met Veronica I was a student at Niagara Public Schools in the late 60's & 70's during Marvin 'Marv' Ropele's tenure as Principal and as I am sure of Veronica, Mr Ropele walked the halls with grace and showing kindness to all. May you keep the Love and Memories of your Parents in your Hearts forever. The Thibert Family

Lori and Family: sorry to hear about your loss. It's never easy to lose your mother, no matter when. Know that many knew and appreciated her and her works, and that she'll continue to live on through you.

Condolences from Dolores and Brian Butler.

We were sorry to read of Veronica’s passing. I’m sure she was well loved by family and so many friends. She was a wonderful neighbor to my mom and dad, as well as to the Nybergs. The obituary is so well written. She certainly contributed much to her church and community. My mom, Lenore, remembers her fondly too. Prayers for you, and may your lives be full of wonderful memories.