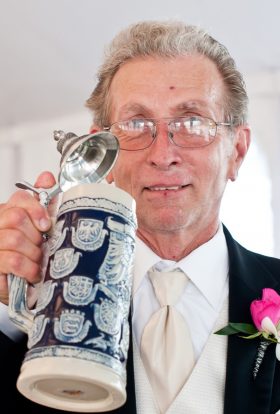 Dennis John Krueger, Sr., a man who is loved by so many and who loved many himself, began his journey to Heaven after battling a rare degenerative brain disease called Creutzfeldt Jakob Disease for three long, yet short months on Tuesday, May 26, 2020, at 10:15 am. He was surrounded and held with love by his wife, sons…read more

Dennis John Krueger, Sr., a man who is loved by so many and who loved many himself, began his journey to Heaven after battling a rare degenerative brain disease called Creutzfeldt Jakob Disease for three long, yet short months on Tuesday, May 26, 2020, at 10:15 am. He was surrounded and held with love by his wife, sons, daughters, and grandchildren as he made his way into God’s arms.

Dennis is survived by his wife of 40 years Dawn (nee Coons), daughter Katie, son Dennis/D.J. (Nicole), daughter Heidi (Jeffery), grandson Bryceon, granddaughter Adeleine, brothers Richard (Coralee) and Kurt, and a very large extended family on both his and his wife’s side. Preceded in death by his parents Paul and Emily (nee Roessler) Krueger and his brothers Paul (Arleen), Rudolph (Barbara), and Walter (Carol) and his beloved dog Bodo.

Dennis loved life, family, motorcycles (especially taking his kids for rides) cars, trains, collecting coins, and beer. Those seven things were very near and dear to his heart. They all make him what we all know him to be—an AMAZING human being. He is unanimously remembered for his one-of-a-kind, contagious laugh, gift for gab, storytelling, two antique motorcycles, pranks (at work he once unrolled an entire HUGE electronic controlled roll of bubble wrap into a coworker’s workstation), military service in the United States Navy during the Vietnam War, his ability to strike up conversations with anyone very easily, his red ‘Elgy-pukr-off’ (you just have to see the shirt to know) shirt trend started by him and his nephew Eric, his love of his east coast family,  love of nature, going deer hunting with his son and friends, growing up with sailing (which explains why he got such a kick out of riding the Lake Express with his daughter Katie), the way he went above and beyond for just about anyone who appreciated him, his many projects with his son, his endless devotion to his children and grandchildren, and the way he wore his heart on his sleeve. He had an immense love for people and how they very much added to the quality of his life.

We, his family, are forever indebted to Paul and Emily, Dennis’s parents, for bringing this amazing man into this world and into everyone’s lives 73 years ago, on November 21, 1946. He did not leave this world without an incredible fight, even through his last hours. He loved music and many songs were played for him, on his last morning with us. A taste of his favorite Köstritzer beer the previous morning from his son D.J., I kid you not, gave him an additional day.  Thank you, daddy, and D.J. for that final day and morning together.

Please watch this webpage and Dennis’s Facebook for upcoming details for his celebration of life memorial to be held later this fall.

Help tell the story of Dennis by contributing to the Life Event Timeline. Upload the photo of an event...

Dennis had a caring heart and was lived by many.